A wide range of treatments are compared, as a combination of 6 cropping systems x 9 fertilisation managements of maize-based forage systems. Treatments differ for C and N additions, and replicate real farm operations in 75m² plots, 3 randomised blocks design. It was established in 1992, therefore it is suitable for studying systems at equilibrium. The site has a unique combination of climate and soil in Europe. With its sandy loam and deep calcareous soils, it is representative of the Po Plain.
Facilities are:

Recently, the fertilisation amounts have been updated to adapt to current regulations (amount of N from manures = 170 and 250 kg.ha­¹). An intensive monitoring of the soil mineral N content at various depths in 22 treatments differing for C and N additions has been started. New and larger closed chambers for GHG measurements are now available. 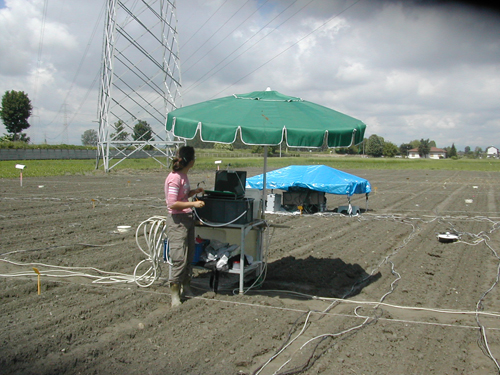 TA User (visit): Taru Lehtinen, Austrian Agency for Health and Food Safety, Austria (March, 2015 – 05 days)
Project Description: Deep soil organic matter (SOM) and microbial activity in the deeper soil layers is a topic not often covered in agricultural studies since the main interest lies within the most active topsoils and deep soils are more time consuming to sample. However, studies have shown that deep SOM does matter (Harper and Tibbet, 2013), although its function and dynamics are not fully understood yet (Rumpel and Kögel- Knabner, 2011). Deep SOM originates mainly from dissolved organic carbon, root products, and transported particulates from the soil surface (Rumpel and Kögel-Knabner, 2011). Subsoils can contribute up to more than half of the total soil C stocks, as was recently confirmed in England and Wales (Gregory et al., 2014), thus, their role, e.g. in C sequestration, should not be underestimated (Rumpel and Kögel-Knabner, 2011). Organo-mineral interactions may play a major role in SOM stabilization, as was shown in calcareous soils from Germany (Grünewald et al., 2006). It has been shown that the molecular structure alone does not determine the stability of SOM, but physical connections and disconnection between microorganisms and SOM control how much is stabilized in the soil (Schmidt et al., 2011). .
In this study, the main aim is to investigate the soil organic matter dynamics in the first meter of the soil profiles in the long-term maize cropping system experiment Tetto Frati, in the vicinity of the Po river in Northern Italy. In addition, soil aggregate stability will be investigated. The detailed objectives of this study are: - Can soil management induced differences that have been detected in the topsoils also be detected in the deeper soil layers? - How are the active carbon, total organic carbon, total nitrogen and potentially mineralizable N distributed in the soil profiles? - How is soil respiration affected by the soil depth? - How is aggregate stability affected by the soil depth? - How are carbon and nitrogen distributed in the micro- (<250μm) and macroaggregates (>250μm)?

TA User (visit): An Vanderhasselt, Ghent University, Belgium (September, 2014 - 3 days).
Project Description: Different agricultural management practices have been shown to increase sequestration of C in soil (Follett, 2001; Janzen et al., 1998). Crop residue management for example influences the retention of carbon in the soil.
In order to maintain soil fertility and –quality, or even improve it, it is important to supply enough organic matter to the soil. Only a smaller part of this organic matter also is on the decadal scale stabilized against microbial decomposition. Cereal crop residues are most often removed from the field and used as stable bedding or as a source for energy production. Yet there is growing interest to valorize grain maize straw for different potential purposes including bio-energy production, biorefining, construction material, ingredient of animal fodder…. By doing so, soil fertility or stable soil organic matter content should not be depleted, in order not to become a possible source of atmospheric CO2. The increasing removal of aboveground crop residues increases the importance of belowground residues or roots. Recently, however, some field experiments have shown that the stable organic carbon pool in the soil is relatively unaffected by the removal of the aboveground biomass from the field (Monaco et al., 2008). Therefore, the intention of this research is to investigate the contribution of belowground biomass carbon to the stable soil organic matter pool. To this end it can be examined wheter belowground biomass is the major contributor to the stable organic carbon pool and which mechanisms are responsible.
The contribution of belowground biomass C to the stable organic matter pool is, however, not fully understood. Over the past 15 years increasing attention has been paid to investigate the relative stability of above- vs. belowground biomass derived SOC. From these research efforts it is now clear that root-derived C remains two times longer in the soil as stable SOC than shoot-derived C (Rasse et al., 2005, Kong & Six, 2010) However, the importance of several hypothesized mechanisms responsible for the stabilization of root-derived C and the interactions with agricultural management are not well understood.

ExpeER TA Site: with Lusignan, France.
TA User (visit): Andreas Pacholski, Crop Science, Kiel University, Germany (November, 2013 – 21 days).
Project Description: Livestock production contributes 70-80% of the anthropogenic ammonia (NH3) emissions in Europe and application of manure contributes a large proportion of these losses. Many cost-effective abatement techniques have been proposed to reduce NH3 volatilization in relation with manure spreading. However, common local manure utilization techniques need further investigation to promote best agronomic practices that reduce NH3 volatilization.
Objectives: The first objective is the in-field quantification of NH3 emissions from farmyard manure and cattle slurry applications on soil with and without maize residues, as they represent the most interesting treatments of the main experimental site for this issue. A second objective is a comparison among different methods for NH3 emissions investigation.
Materials and Methods: in field NH3 emissions will be measured for 3 days after surface application of cattle slurry, farmyard manure and for 2 weeks after application of urea on bare soil with and without maize residues (six treatments as total, with three replications).
Measurements shall be done according to a new multi-plot method developed in Germany (Gericke et al. 2011). Comparisons between treatments and replicate measurements are done by semi-quantitative sampling with acid traps. The obtained values are scaled to absolute losses by measurements with a calibrated chamber method (Pacholski et al. 2006). This approach has been proven valid compared to micrometeorological standard methods in several field trials in Germany (Quakernack et al. 2012, Ni et al. 2012). At some measurement campaigns micrometeorological measurements (Sommer et al. 2005) will be done to test the validity of the multi-plot approach under conditions of Northern Italy.

TA User (visit): Marina Bleken, Norwegian University of Life Sciences, Norway (April, 2013 - 13 days).
Project Description: Results from the long term trial on cropping systems at Tetto Frati will be used to estimate the yield and environmental performance of contrasting cattle farming practice in the Po Plain. The upscaling from crop system to whole farm scale will be modulated on the farm structure of real enterprises in the Piemonte area of the Po Plain. The characteristics of the herds and the degree of animal intensity will determine the need for forage and for disposal of animal manure, and results from the long-term cropping systems at Tetto Frati will be used to design feasible management plans for crop production and manure application on the farm. Data about important environmental indicators as nutrient leaching and soil organic matter changes will be estimated for the whole farm using response curves observed empirically at Tetto Frati. GHG emissions will be estimated according to IPCC methodology.
The objective of the study is to identify farming strategies for sustainable cattle production systems in the Po plain that comply with the requirements of the Nitrate Directives and Water Framework Directives of the European Union, as well as estimate their impact on GHG emissions.