New measurement techniques will be developed and/or tested with regards to soil moisture, structure and metagenomics and canopy activity. With instruments from atomic force microscopy to remote sensing, these methods, where possible, will be tested at a range of scales from laboratory to field and region.

The main focus of this task is to investigate the potential of next generation sequencing technologies in elucidating the biodiversity of soil, sampled from long-term ecosystem manipulation experiments using a soil metagenomics approach. With this in mind, three long-term manipulated sites have been selected and were sampled for DNA extraction.
The sites chosen represent:

During the summer and autumn 2011, soil DNA and RNA were extracted using well established soil protocols. From November 2011, DNA samples were extracted for sequencing using Illumina Technologies. First data were available early 2012 to give some indication of the level of sequencing that will be necessary in this study to provide adequate detail of biological diversity and abundance.
Analysis of the initial biochar data is currently being undertaken using several metagenomic tools, including MetaPhlan, MEGAN and MG-RAST, to ascertain changes in microbial community compo-sition between treatments. Soil samples from the additional biochar treated field site (site (3) associated with the EUROCHAR project) will allow comparison of community composition and gene frequencies once metagenomic analysis is complete. Time series samples (before biochar, one month after amendment and one year from amendment) collected from the third site will allow study of changes in community composition over time as a result of biochar addition. In addition, soil respiration data from the EUROCHAR site will permit comparison of soil respiration rates with hydrocarbon degradation gene frequencies, to determine the rate of biochar decom-position. Sequencing of the samples collected from site (3) is to be undertaken during 2013.
16S rRNA sequencing and analysis is being carried out on samples from sites (1) and (2). This will allow comparison of shotgun metagenomic techniques with more traditional 16S barcode methods. Use of this technique in conjunction with shotgun sequencing should provide an indication of the accuracy of the use of shotgun metagenomics and bioinformatics pipelines.

Soil moisture as a driver of soil interface architecture and function - developing new approaches for testing at laboratory, experimental and field scale.

Soil aggregates provide an extremely large heterogeneous, three-dimensional complex structured surface which harbours a vast biological diversity and chemical variability, highly dependent on the soil moisture status. They are intimately involved in the major soil hydraulic, chemical and biological processes. As such they are a key factor for interaction, transport and turnover of mobile soil constituents and are intimately involved in the major water and biogeochemical cycles. With the advent of advanced spectroscopic and spectromicroscopic imaging and mapping, such as AFM (atomic force microscopy), NanoSIMS (secondary ion mass spectrometry) and XPS, as well as compound-specific analysis techniques in combination with advanced preparation, sectioning and ablation techniques, we will be able to study architecture, three-dimensional build up and process at the nano-scale and in real time. These techniques will become established within the new soil system research platform coordinated at FSU Jena. This approach allows especially to characterise the soil structural assemblage with respect to its function as a microbial habitat.

A new sample preparation technique for the micro-scale evaluation of soil interfaces has been developed. Furthermore, experiments on the lab scale to test new approaches for the analyses of  interfaces while avoiding artefacts from dissolution processes are started. The improved isotopic technique for the study of turnover of organic molecules in soil at different land management was applied at the ExpeER site Lusignan to follow the impact of grassland conversion on the dynamics of cutin and suberin.
Moreover, suitable samples for the study of the effect of microbial diversity on litter decomposition using the Nanosims technique were identified and will be analysed in the forthcoming project period.

New sensor technologies for integrated observation of soil moisture at the field scale and landscape scale.

This task explores new and innovative sensors and novel measurement technologies for a better assessment of soil moisture. This allows improvements in the analysis of complex feedbacks mechanisms between the different environmental compartments, and the validation of biogeochemical models. Bridging the gap between field and landscape observation scales is an important issue as well. The task takes advantage of new emerging technologies within remote sensing and low-cost online sensor technologies that allow for near real-time estimates of soil moisture in order to analyse the strength and weaknesses of these techniques to observe soil moisture dynamics at different spatial and temporal scales.
Different measurement technologies were already set up and different measurement campaigns at different ExpeER sites were conducted.  This includes hydrogeophysical methods such as mobile geophysical platforms using electromagnetics and gamma-ray specotroscopy, wireless soil moisture sensor networks (WSN) and Cosmic Ray Probes (CRP). Several CRPs have been set up in the TERENO observatories Eifel/Lower Rhine valley and Harz/Central German Lowland. The results of the first year of operation are currently under evaluation. The extensive soil moisture measurements of the WSN installed at the Wüstebach (forest) and Rollesbroich (grassland) sites (FZ Julich), and the Schaefertal site (grassland, UFZ) have been already used to calibrate the CRPs.
A soil-plant-atmosphere transfer model specifically adapted to grass vineyards at the Roujan site has been developed and successfully tested using the infrastructure installed within the context f the ExpeER project. A WSN will be installed at the Roujan site in summer 2013.

Remote sensing platform to assess the relationship among plant primary production, and phenology. 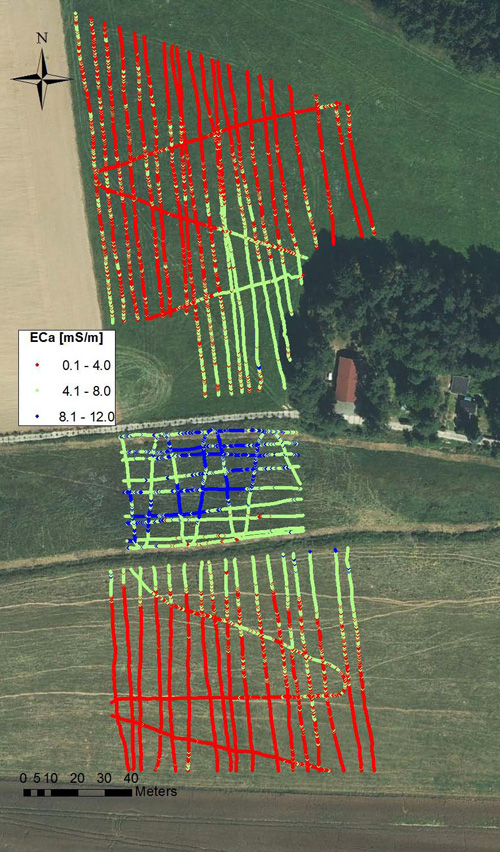 Activities are aimed at exploring a variety of remote sensing systems, mainly state-of-the-art hyperspectral ones, for assessing various ecological variables such as plant primary production, phenology, leaf area index, chlorophyll nitrogen contents, and many others as well as to overcome current limitations in the use of remotely sensed measures.
Three levels of measurement scales have already employed - laboratory, plot/fields, and airborne. These includes: